Phaedra continues down the corridor, her sister right behind her. She opens the door and moves into the room. Suddenly the floor is lit with a blue glow. With a thunder clap and a lightning flash, two huge felines appear, bigger and more beautiful than lions. The celestials roar a challenge and attack. The scout immediately teleports to a safer place, while Jharrath casts his protecting mage armor. A cross bow dart, shot by Lilith, zips into the room, but does no visible damage and falls harmless to the ground. Alvra moves towards the front of the fight, while Phaedra tumbles backwards, exiting the room. The cats follow, roaring ferociously, and lash out at the scout with their mighty claws. Quickly Jharrath utters a spell and manages to get rid of one of the lions by dispelling its magic.

Alvra charges the remaining cat and hits it with his second attack. The slash doesn’t really permeate the skin, but he manages to damage it a bit. Phaedra hits it hard twice with her spiked chain. And when the celestial lion tries to counterattack, it gets slaughtered by a combined effort of the drow.

When the sisters re-enter the room, they find four sarcophagi. Phaedra removes the lid of the first. There’s an old skeleton, wearing a nice necklace with moonstones. The second sarcophagus is empty, but in the third, Lilith finds a skeleton with a short magic spear in his hand, the spear head glowing blue with white tendrils. In his other hand is a wand. The cleric takes both objects and shows them to Alvra. He has no time to examine them closely so tucks them into his backpack. In the last sarcophagus, Lilith finds a gold necklace.

Back in the hallway, Phaedra moves towards the next door. It is sealed, plastered shut, and no one has visibly tampered with it. When the female drow pushes against the door, a force flows through her hand and drains the life out of her. Suddenly it gets very cold. Phaedra feels like she has barely escaped with her life. Her sister detects a residue of magic on the door, and a strong magic force in the middle of the room, several lesser points around it. Jharrath summons a medium earth elemental, which he orders to vigorously attack the door. The creature pounds on the door with his massive arms, and soon plaster is falling down, while one after the other thump resounds down the corridor. Soon the door is in pieces.

In the middle of the room a large statue of a regal looking female drow. She’s wearing an elegant gown and has a commanding attitude. Behind her are two doors, as are to the side of the room. Lilith keeps focusing and notices that the magical aura moves into the statue. She warns the others and they ready, tense.

A female voice, shrill and high, utters an unintelligible sentence, aggressively repeating one word in particular. The cleric replies that they don’t understand her, first in Undercommon, then in Drow. The creature in the statue doesn’t react to her words and again repeats the threat. Then a ghost with a terrifying face appears over the elemental. It is the image of someone who died a long time ago, and it has nothing of the statue’s beauty. Before the drow are able to take a good a look at it, the image disappears again. 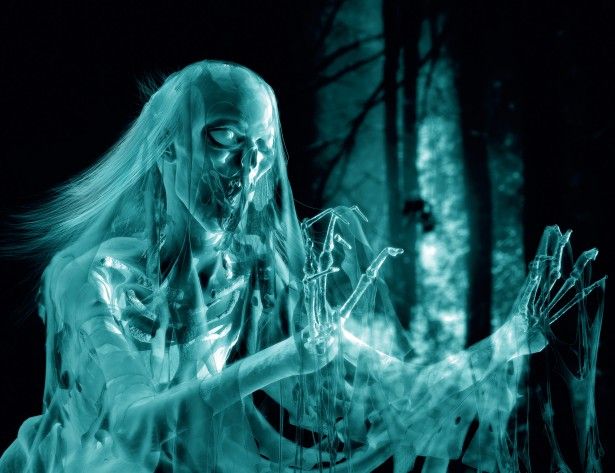 I think it is the ghost of someone of importance, buried here,

Jharrath says, when suddenly the statue’s hand rises. It attacks the elemental – which is not very impressed though. The mage orders his creature to counterattack, and successfully. A lesser orb of acid finishes the job, and the statue crumbles. In its place a surreal shape of a ghost rises that looks very insistent at the drow. It is like her gaze pierces their souls. The apparition hovers incorporeal above the floor.

Alvra lashes out with the magical side of his sword, but the strike moves through the ghost’s body. When the elemental’s fist also passes harmlessly, Jharrath attacks with a magic missile. Calling upon the Spider Queen, the cleric rebukes the undead, but to no avail. The creature is too strong. Phaedra tumbles into the room and each time the ghost tries to attack her with her incorporeal rapier, the scout teleports ten feet away. The ghost hisses in frustration. Alvra’s sword then scores a hit, and a magic missile does even more damage. Again Lilith rebukes the creature, and this time the old crow is frightened and cowers before the cleric. She withdraws into a corner of the room, unable to act. And while Lilith keeps a threatening eye on the apparition, her siblings attack the undead. As yet another magic missile finds its goal, the ghost disappears with a last frustrated cry of outrage. 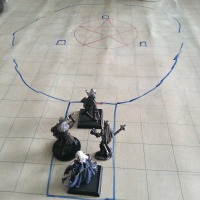