The Xaniqos try to rest, while Phaedra keeps watch. It is unnerving to hear and not see. When two hours have passed, new flapping sounds can be heard close to where they were ambushed. They don’t seem to come closer though, and the scout doesn’t feel she ought to wake the others – yet. After a while, Alvra takes over the watch; he’s not totally rested but does feel somewhat better. In the quiet of the night the fighter hears moaning wails, one answering the other. His fighting experience tells him that an attack is impending, since the beasts are gathering again. When the numbers keep growing, the urgency to leave grows too and he softly wakes Lilith. Trusting her brother’s instincts, she orders him to wake the others and dons her armor. Jharrath’s spells have not returned yet, and neither have her own, but their enemies are approaching once more.

Jharrath has just cast tentacles of force, when a loud sonic screech resounds. The sound grates on their nerves, but, apart from Phaedra who starts shaking, the drow break loose from the effect. While the dreadful moaning continues, the cleric gazes beyond the tentacles and catches not only glimpses of cloakers, but also of a larger specimen in the shadows of the Underdark tunnel. She grabs her sister’s hand and pulls her along – away from the area – with Alvra in the lead. Suddenly Lilith notices how the air shimmers near them: someone – or something – is coming!

A huge cloaker materializes from the shadows near the wizard, several smaller ones hovering near. Jharrath uses his dimension boots and reappears in front of his siblings. Alvra keeps on running full speed, with his sisters on his heels, Phaedra being guided by Lilith. The scout seems to be in a deep trance, unable to defend or attack. The winged beasts follow in formation. Jharrath casts a fireball at their attackers, but again the Cloaker Lord plane shifts. The explosion rocks the corridors and for a little while the moaning stops. The drow get the feeling they’re being herded, the creatures are waiting for them to take a wrong turn. Alvra is somehow able to avoid the dead ends and seems to know where he’s going.

After fifteen minutes of hot pursuit, the moaning stops and then seems to go away entirely. The fighter still keeps on running, and when they’re no longer able, forces them into a quick march. Suddenly he hears an alien, sonic voice saying ‘And stay back!’, while the last word eerily echoes through the underground. He has the feeling this might have been their end. When Phaedra, who has come to her senses, hears about the apparition, she tells her siblings this was probably a cloaker lord, a superior sub-race of this feared subterranean race.

Once they have caught their breath, they continue once more. Alvra doesn’t know exactly where he is, but he manages to find them a reasonably safe spot where they can rest. He keeps watch though, and stays alert throughout the night. The darkness stays quiet. 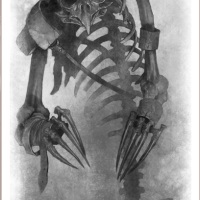