Phaedra is hit by the mind flayer’s psionic blast, which she manages to repel. It still feels nasty though. Eight lizard-like creatures swarm from the statue and head towards the scout. The beasts resemble two-legged lizards with long, flexible tails. Having no neck, their massive mouths with three mandibles are attached directly to their bodies. The ethereal marauders utter an irritating whining sound. 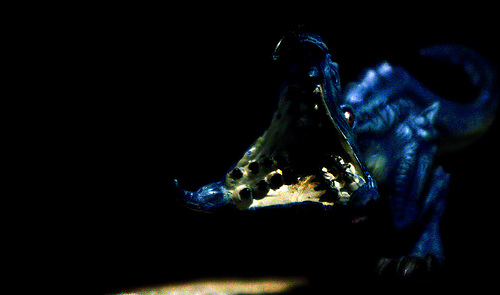 With her crossbow at ready, the scout ducks behind the statue. The others arrive at the landing too and see their sister surrounded by muzzles with legs, but before they can jump into action, another psionic blast hits the room. Lilith and her wizard brother are safe, but two marauders are not that fortunate. They freeze, while the others disappear. Phaedra tumbles past them and casts a spell, so she – and only she – is able to see these ethereal creatures.

Alvra, having passed a living room on his way down, finally finds his siblings again. He almost bumps into the wizard on the stairs. The fighter continues towards the opening and sees a mind flayer, the drow sisters and two open mouths.

A sizzling fireball whizzes towards the illithid. The statue and part of the wall are blackened, but the mind flayer isn’t bothered at all. When the cleric launches a flame strike, the octopus head vanishes, only to reappear behind Jharrath. The wizard feels a presence next to him and uses his boots to teleport. Now he ends up in the room with the silver strands. Like his brother before, Jharrath passes a room with an ice sphere of crystal clear light on his way down. A large, unearthly beast with spikes is caught in the middle of it. As he watches, a flash of ice cold light shoots towards the dark elf. Fortunately it misses. The wizard realizes a demon or devil is trapped in there. He continues downwards on the staircase, back to the other drow.

The marauders attack the scout, who lashes out with her spiked chain, killing one of the beasts. Alvra is attacked as well, and puts his sword to good use. Lilith clubs a marauder to death, when she feels slithery tentacles on her head. They try to get a hold, but can’t get a grip. The cleric tastes the mind flayer’s frustration.

Phaedra and Alvra notice what is happening to their sister. Another marauder bites the dust, killed by Phaedra, and returns to the ethereal planes. Alvra charges the mind flayer and scores a hit with his sword. A filthy, purple substance oozes from the illithid’s body and a yell resounds in their heads. Again and again the drow slashes at the humanoid, aided by Lilith. The mind flayer focuses all his mental energy in a mind blast. The cleric is not affected, but Alvra is stunned. The last marauder also attacks Lilith, but only manages to add another scratch to her armor. Phaedra tries to advance on the illithid, but her brother stands in her way. Her spiked chain kills the last yapping muzzle. With a mighty swing of her flail, the enraged cleric kills the mind flayer.

Eight pearls are embedded in the statue, and when Phaedra pries them out, the statue becomes dull. There is no gem though. After a while, Alvra has recovered enough from the psionic blast to search the mind flayer’s repulsing corpse. He finds some gems, but not the right one either.

There are more rooms upstairs: a living room, a room with an ice creature and one with strange strands of webs. Perhaps the item we seek is there.

The drow resume their journey to the top of the tower.