The next day, Phaedra, Jharrath and Lilith are invited into the Matron Mother’s throne room. They are led onto the balcony, which overlooks an arena where three goblins are waiting. Two rows of dummies are situated near the opposite walls. On the other side, their brother Alvra is atop a huge riding lizard, dressed in a brand new shiny piwafwi. Alvra greets the Matron Mother, who nods back. She explains to the others that the Fighter will give them a demonstration of the use of mounts in combat. ‘This might give us an advantage over the other Houses’, Lady Thandysha says, ‘but its usefulness remains to be seen’. Because of the Priestess Wars not many mounts are left; this would be House Xaniqos’ first.

Alvra urges his lizard forward and charges the goblins. The creatures react enthusiastically. Weird, considering their survival chances. The Fighter’s javelin misses the walking fodder in the middle. When the lizard next tries to bite the green creature, it starts to look a bit doubtful. That expression is wiped away when the reptile’s claws rake off its head.

The remaining goblins take up new positions and Alvra takes the opportunity to throw a second javelin. This time he hits and one of the creatures takes a spear in his body. The other humanoid has a big smile on his face, gazes up at the Drow and… attacks his injured fellow goblin!

With one thrust, he kills the other and parades the battle field like he’s the winner. Apparently the creature made a pact with the Drow Fighter. But there can only be one winner, and that is not this goblinoid! Alvra steers his mount towards the beaming goblin and with one swipe of his mighty sword he cleaves the green monster in half. Seems like the deal is off!

Alvra leads his riding lizard towards the balcony. The Lady Thandysha tells her son that he might need more training and further development of his combat tactics, but that overall it was an enjoyable performance.

Well done, Alvra. You have shown me you may spend more time on cavalry. Acquire more of these animals in Dunspeirrin.

Guards, clean up the area, and son, report up here within the hour!

With a swipe of her garb, the Matron Mother leaves the scene. 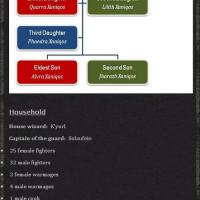