The Xaniqos drow hear a lot of thrashing in the water, something is about to happen! When Phaedra peeps around the corner, she sees a shape rise from the water. Within seconds, one of the shadowgoblins is engaged in a fight with an owlbear skeleton. This large magical beast usually looks like a cross between an owl and a bear, not like a moving heap of bones. It is clearly the result of a magical experiment. 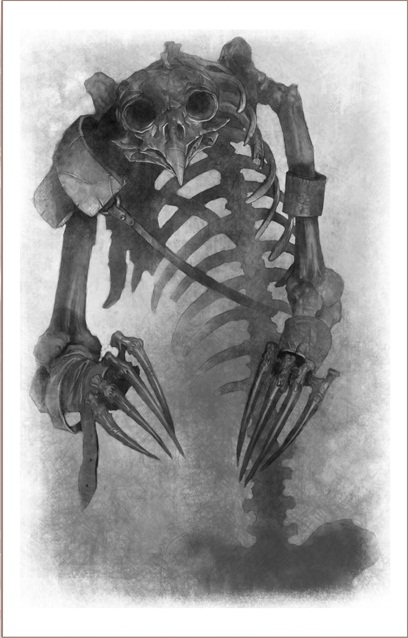 The warriors wade into the water and see an impressive skeleton fill the entire chamber. Jharrath sends a hail of stone towards the beast. Enraged, the owlbear attacks the Cleric who is standing nearest – waiting for the opportunity to get a good swing with her mace – but misses. When Alvra’s javelin skitters between its ribs and the Wizard splatters it with acid, again the owlbear slashes at Lilith with both arms. This time its claws rake through the Cleric’s armor. It should not have done that.

The furious Cleric raises both hands and in a frightening voice casts a rebuking spell. Her indignation at being injured by the skeleton gives her the power to overcome the beast.

Kill it while I hold it. I want it dead!

Alvra walks past his sister towards the skeleton, that is now cowering in the corner of the room, and starts hacking. Chunks of bone fly through the air and, aided by the Scout, he slays it. The owlbear crumbles into the water until nothing else remains but a heap of bones.

The antechamber opens into a corridor that is also filled with water. The eerie gleam of fungi adds another dimension to the already sinister passage. The corridors form a square, with two doors on either side and a big sealed door on the opposite side. At the end of the left corridor, a chest is submerged in the water. Behind the first door is, or better was, an alchemy laboratory. The shelves are sagging and broken flasks and utensils are everywhere. On the tables in the center more bones: sad remains of humanoids who once were held there with leather straps.

The second door on the left is locked, but that doesn’t stop Phaedra. She enters the room, the Cleric on her heels. They are greeted by a lot of rubble, two fallen tables, scalpels and dried blood. The floor slopes upwards towards the end of the room, where two mannequins are covered with flaps of skin. The instant the drow enter, three skin flaps launch themselves into the air, attacking the sisters. Skinkites! 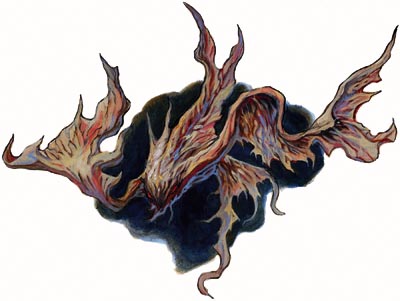 Phaedra nimbly tumbles back into the corridor and escapes, Lilith also in full retreat. When the first skin kite enters the corridor, the Wizard fires an electric bolt at it, while Alvra wields his sword. It goes down. Then the second flying fur coat enters the dungeon, soon followed by number three.

While their attention is taken up by the fluttering skins, three humanoids secretly move upwards through the water near the chest. They seem to be made of legs, bones, teeth, matted hair and stone. The creatures attack the Scout and bite her leg. A searing pain shoots up her leg and Phaedra immediately feels sick. That bite must have been more than just a bite! She tumbles past and lashes out. Jharrath identifies the creatures as tomb motes.

Alvra (nicknamed the Skinkite Flayer by now ;)) manages to chop another skinkite to pieces. The third though has attached itself to Lilith’s face and chest, and is ripping away chunks of her skin. The effect is not positive: neither on charisma nor on temper. She tries to tear it off her, but it only settles deeper into her skin. The Fighter wades over to his Cleric sister and starts pulling at the kite. With a sickening crunch it lets go and flutters away. Lilith grabs her mace and hits the damn thing, pieces of her own skin hanging loose. Not a pretty sight. Jharrath aims an electric bolt at the skin kite, but misses.

Meanwhile the tomb motes are moving in, attacking and moving out again at amazing speed. One of them manages to bite Alvra and again the pain, but not the nausea. First things first. The Skinkite Flayer makes his third victim and then turns towards the tomb motes. But these agile creatures are very fast. The Xaniqos siblings can not seem to hit them. It takes the help of two summoned earth elementals to finally kill them.

Silence once more rules the dungeon, disturbed only by the panting and subdued moaning of the drow…