The tunnel echoes with their footsteps, while the drow make their way deeper into the maze of the Underdark. At some point they realize something or someone else is near! Babbling and scornful chuckling reverberates from an alcove up ahead. Phaedra sneaks closer to check it out, when suddenly a female voice calls out:

Phaedra looks inside the small cave and strains her eyes, but sees only old webs, stalagmites and spider nests. Then a figure in black drops from the ceiling and lands ten feet away.

Don’t make funny moves and lay down your weapons!

Her voice sounds rusty and is of an irritating level, like she’s not used to talking. The others draw near. “Who are you,” Lilith asks.

I’ve been watching you fight those nasty followers of the Lady of the Dead. They don’t worship Lolth like I do.

The woman looks humanoid, but has very long arms. It is a drow, dark, with wild hair and multifaceted eyes. Her fingers are also long, and her clothes adapt to the background. The drow in black is very nervous and she keeps everyone in sight, her eyes darting everywhere. 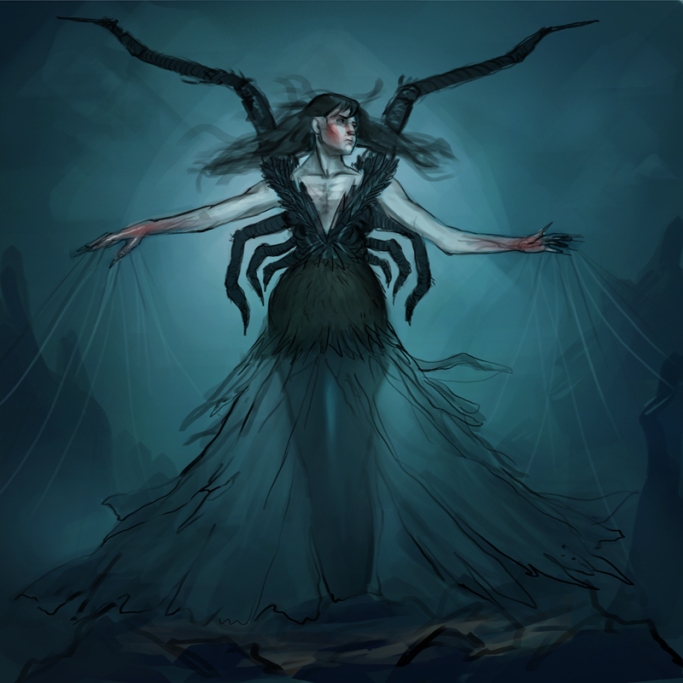 Lilith knows that some priestesses go very far in their devotion to Lolth, and suspects this is one of the Fangs of Lolth. These devotees slowly transform into a spider through their worship.

I used to live in Maerimydra, when the evil priestesses of Kiaransalee banished me. So I came here. But I’m sure this is a test: in the end the Spider Queen will reward us!

The Xaniqos cleric quickly agrees, and prompts her to continue.

I have been to Szith Morcane many times. There are other entrances, entrances that are not guarded. I won’t go up with you, but I can tell you where they are. There are hundreds of drow in the city. If you follow this corridor, it will split up eventually. To the right are very hungry driders. And if you go to the left, there’s a very large cave with undead vermin. Priestesses have been transforming them for Szith Morcane. I would recommend you go the left. After that, the corridor will lead you to the upper city of Szith Morcane. It is a very filthy place, and something is guarding it. Something foul! There are no safe places around here; even this tunnel is being patrolled often.

The dark lady starts to get agitated when the siblings move too close to her backpack, so they keep a healthy distance. When no further information can be gained, Lilith starts praying to her deity,  and the woman calms down.

Notwithstanding the ever present threat of the Kiaransalee, the Xaniqos siblings decide to rest, too tired to move on. Phaedra keeps watch. After a few hours, the Fang picks up her backpack and says goodbye, whispering “May the Spider Queen give you strength to defeat your enemies.” “Perhaps we’ll meet again,” Phaedra replies. The dark drow disappears into the dark. The scout wakes up Alvra and settles down for a bit of sleep herself.

When the others wake, the Fang of Lolth is gone. The spell casters feel rested and together they follow the meandering corridor of the Underdark. Their scout is in the lead, constantly checking her surroundings, but all is peaceful. Finally they come upon a split in the road, where they take the left fork.

It is opening into a very wide passage. The sound of many scurrying feet ripples through the air, and they are closing in fast. Stalagmites and stalactites obscure their view. The wizard summons three medium earth elementals, while Lilith holds her holy symbol aloft and casts a spell. A silvery radiance dances from her hands and leaps over all party members, strengthening them. The cleric takes her flail in her hand, while Alvra draws his sword.

No less than twenty medium sized spiders come rushing forward! Phaedra activates spiderclimb and scrambles up the wall. One of the earth elementals attacks the passing spiders and smashes its fist down. The smell of decay fills the air and a white fluid seeps from the carcasses. Lilith’s flail also successfully finds a target. Then her sister calls out.

These are only the forerunners; behind them is a huge spider with a gigantic thick belly. Green slime oozes in its wake. Smaller spiders are originating from the larger beast! 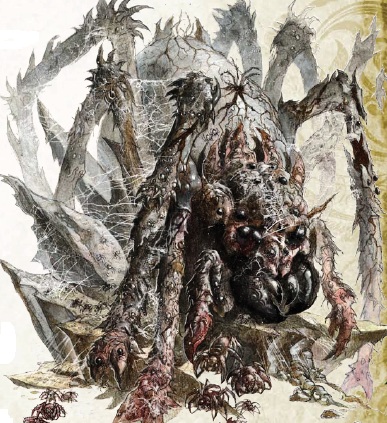 The cleric groans. She recognizes it as a husk spider, an undead creature that is formed from the carapaces of monstrous spiders and animated by dark magic. The priestesses of Lolth are known to create the same monsters.

The husk spider lumbers towards the earth elementals and attacks with its mandibles. It drains the energy from one of the elementals. As a result, it gets even stronger!

The scout enters the cave climbing and looks around. She sees no other creatures at the moment, so she makes her way to a niche, fifteen feet long, where she can stand on. While Jarrath activates his boots and teleports back to safety, Lilith rebukes the smaller spiders: eleven spiders cower in fear and are unable to attack. Her fighter brother jumps in and starts slaughtering them.

The huge spider charges one of the earth elementals, and while they are thus engaged, the cleric releases a flame strike on their asses. Severely wounded, the arachnid pulls back behind the stalagmites. Jharrath, protected my mage armor, encourages the remaining elementals to keep on killing the rest of the smaller spiders. They seem to have a good time.

From her high perch, the scout observes how the husk spider escapes and climbs down. It ran that way, she signs to the others. Together they slowly make their way into the giant cave and search the corner where the arachnid is hiding. Jharrath moves his elementals forward, while Lilith baths the corner in faerie fire. There’s no spider though.

Suddenly the beast attacks from above, charging Alvra with a bite attack. Phaedra tumbles back and slips, but manages to keep her distance. Quickly she takes out her spiked chain. With a handful of ashes, the wizard shoots a Kellgore’s fire bolt, and Lilith projects a blast of light from her open palm, straight into the beast’s torso. The husk spider is wobbling on it’s eight legs. Alvra moves in for the kill, and with three powerful strikes, the beast is on its back. The cleric takes a good look at the carcass. “It’s a widow maker,” she says, “very aggressive beasts.”

When Phaedra searches the cave, she finds a dead drider and his short sword, which looks valuable enough to take with them. When they move forward again, the cave ends in a narrow corridor. They keep left and walk on. After a long journey through empty caves and ditto walkways, they come upon another large cave. This one smells dreadfully.

The scout moves ahead and then stops. In the middle of the room there’s a mount of bodies in various degrees of decomposition. Some are down to bare skeletons. And something has been eating them! 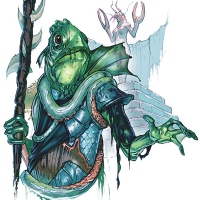 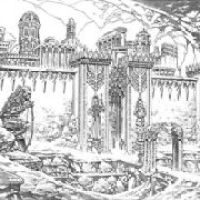 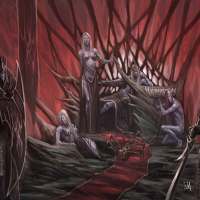 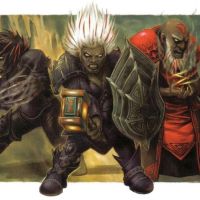