Phaedra wakes up with the smell of meat in her nose. Finally the effects of the drow sleeping poison wear off. While she shares the plate with the wizard, Alvra brings her up to date. They follow the fellow’s instructions, taking the road towards Old Stinky’s Place. On their way, they meet an old man and woman.

“Better go inside,” they say, “there’s a storm brewing!”

Lilith and Alvra continue towards the inn, while the wizard follows. It is in bad shape, overgrown and full of moss. The fighter gazes through the blinds, crooked on their hinges. A fat man is serving behind the bar; two others are playing darts, but without the darts. At the far end, a drow —all dressed in black— is talking enthusiastically with two others. Jharrath notices that none present have shadows, except for their fellow dark elf. 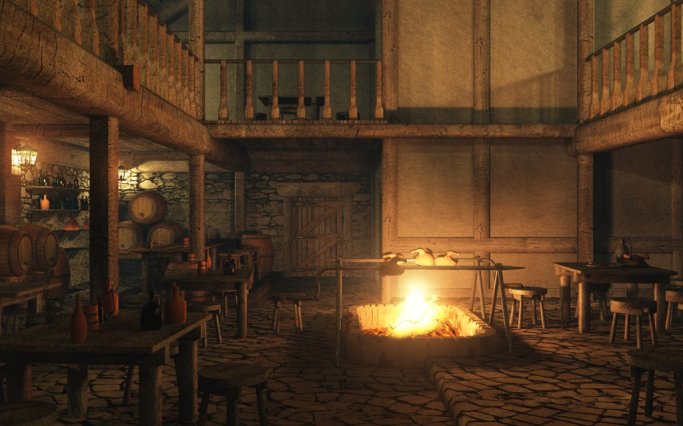 When the cleric steps inside, the drow man cowers a bit, trying to make himself inconspicuous. Alvra assesses the man’s skills.

“Now what can I do for you? Do you need food? A room?” Lilith looks at the broken stairs and then back at the bartender. The place is in shambles. “Just a drink for now.” She accepts a mug of ale.

“Why aren’t you at the party?”
“Because I don’t dance,” the drow cleric says sharply.

Her brother joins her and asks for food, whereupon the inn keeper offers him a plate of stew.

Alvra, who’s been keeping an eye on the unknown drow, notices that the guy only has eyes and ears for his sister. He hardly participates in his earlier conversations with the two humans. The fighter straightens –making his presence a bit more threatening– steps closer to the other male drow and asks,

“What brings you to Old Stinky’s Place?”
“I live here, further down the road. And you?”
“Ah, we’re just passing through.”
“Hmmm, yours seems to be a small group.”
“As far as you can see, yes.”
“You’re accompanied by a cleric, and your hungry friend over there is no fighter. Hmm, quite odd.”

“Why do you want to live above grounds?”
“Why not. Here I have everything I want. And it is one of the nicest villages around.”
“I don’t believe you, there must be something else.” Alvra stares at him.
“OK, let’s say it’s a lucrative environment.”
“By lucrative, you mean looting?”
“Yes, that too. But we’re also being conveniently spoiled by the former residents.”
“Why are they still here?”
“That’s because of the curse – I know the person who has delivered it. But we don’t exactly mind. In fact, it comes in quite handy.”
“What do you call yourself?”
“I’m Theo. What’s it to you?”
“Ah, so you are the joker! Ton mentioned you. Come on, let’s hear a good joke.”

Alvra stares at him expectantly. The other drow looks around, slightly baffled.

“I had no idea I was famous? But I don’t know any jokes.”

The fighter decides to throw in some bait.

“Do you know a drow female with a difficult name? Ton advised us to contact her.”
“Sorry, I can’t help you.”

And with a quick gesture, the drow drinks a potion and disappears. Alvra grabs his sword and swings it where the drow has been standing mere seconds ago. The two ghosts jump aside, startled and a bit scared.

“Hey! We do not tolerate this kind of behavior in my inn!”
“Do accept our apologies,” Alvra replies, “making trouble seems to be in our culture.”

His words restore a bit of the earlier amiability.

The younger Xaniqos sister has been scouting the surroundings, keeping to the bushes and greenery. On the other side of Old Stinky’s Place is a collapsed tower, also in a bad shape. Phaedra sees broken benches and a lot of rubble. She notices that several slabs of stone are deliberately positioned over the pieces of stone and mortar. When she sneaks inside, she sees two human guards patrolling the site. Could this be an entrance?

She heads back towards the inn entrance to rejoin the others, when suddenly she feels someone bump into her. She sees no one though. Acting immediately, she activates an ability and sees a strange drow taking off towards the stream.