Warily the Drow again approach the portal, but this time all stays peaceful; seems there are no other drakes around. They lead the lizards through and for a moment, all are totally disoriented. When the sensation passes, they find themselves in a dark cave where several battle ready Kua Toa are waiting for them. When the guards hear that the Drow have been trading with the Duergar, they are allowed to pass. Once again they are back in the dark and gloomy city of Looblishar. 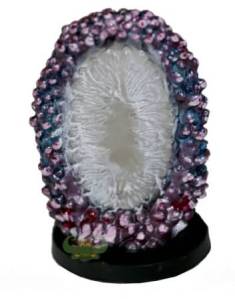 At the temple they meet Vuon, who leads them to the throne room. In stead of Kerl Ooil, a Drow male is sitting on the throne – the one they met on their way to Dunspeirrin. Lilith tells him she needs passage to Erelhei-Cinlu overland with their cargo. Xothed Trizz ‘Lorlin makes her a better offer:

You can travel overseas, since Vuon is traveling with a big group to Blessed Seahaven anyway.

And how much will the passage cost us?

Because I have a special interest in your group, the passage will be free. All I ask is that I can call on you in the future, where you will have to hold your end of the bargain. The offer stands for two days.

The Cleric thanks Xothed with a curt nod and turns to leave. Vuon leads them outside. The Xaniqos are wary of the offer, but the sea trip will take them four days and by road it will take three weeks. Jharrath asks Vuon if there is a library. There is none, but there is a Kua Toa temple that has recorded history. Phaedra and Jharrath decide to visit it. Many eyes are watching them from the dark. At the temple, a priest dressed in gold reads the old tomes – necklaces made of seashells – to the Drow. On the wall of the moist and wet dome-like room the history of the Kua Toas is depicted in mosaic. The void, the nothingness, is worshiped in these scenes. The Priest tells them that Vuon was challenged to a duel and has won the right to lead the mission to Blessed Seahaven. These heathens need to join our cult, he says. Do you know that Looblishar means ‘Forsaken for Shar’, forsaken until the void comes? After the visit to the temple, the Drow go to the docks to take a look at the barges. Last time there was some activity, but now the port is buzzing with action. There are ten large barges, some of them are being loaded with chests and crates. Many Kua Toas are armed to the teeth. After observing the scene for a while, brother and sister go back to the Inn

Lilith has been questioning the bartender on the subject of the ritual. It seems that this year the ritual to persuade Kua Toas to come to the goddess Shar, is much bigger than usual. When the Clerk mentions the name Kerl Ooil, his expression becomes uncertain, and upon hearing the name of Trizz ‘Lorlin, a look of fear crosses his features. She goes to her room and prays for guidance to the Spider Queen, but the answer remains unclear. The Cleric is inclined to refuse Trizz ‘Lorlin’s offer for now and see how he will react. She doesn’t like to be forced into an uncertain situation and doesn’t trust the male one bit. There must be a catch to his offer.  After a night’s rest, where Jharrath and Alvra keep watch, the Cleric again prays to Lolth and casts a divination spell.

Will it be an advantage to House Xaniqos to embark with the Sharan Kua Toas?

After a long silence, the answer is

You will meet no peril on that journey.

Still rather cryptic, but Lilith makes up her mind: they will go by sea anyway. The extra 2.5 weeks would take too long, they need to get back to their House. 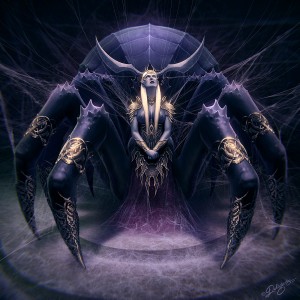 Phaedra and Lilith go back to the temple and inform Vuon of their decision to board. The Scout emphasizes that whatever happens in Blessed Seahaven, the Drow will be kept out of it! Vuon agrees and tells them to be ready in two hours. They pay the inn keeper and walk towards the port. Two barges are packed with cargo, three others are filled with slaves who carry crude weaponry, like javelins and spears. Three barges are still empty; it seems those are for the Xaniqos and their lizards. The animals are lead onto the barges – four per barge – and secured, while eight Hobgoblin slaves man the oars. Around fifty Kua Toas are in the water, swarming around the vessels. At the plateau above, the Drow male has appeared to see them off, accompanied by humanoids in cloaks. Vuon lifts his scepter and cheers, and is answered by the gathered Kua Toas – the exodus has begun.