A distant rumbling – much like a volcano – helps to camouflage the noise they might be making. When Phaedra comes closer, she notices the two shapes are no Duergar, but a kind of salamander with a human torso and snake-like lower body. One of these Flamebrothers sees the Scout and runs further down the corridor, but the Drow is quicker and drops down in front of it. Lilith charges to help her sister, but misses her attack. A magic missile sizzles through the air and hits one of the Flamebrothers, while Alvra is less lucky with his javelin. The beasts attack the Drow females and the fight rages back and forth. The creatures use both their tail and spear and Phaedra gets hit. The Drow intensify their attack and draw blood with flail, javelin and missile. When two more salamanders appear from the corridor, the Cleric activates her wand and releases a circle of hurtful energy. The wounded creature’s wounds are torn apart and it drops down, dead as a stone.

Jharrath presses onward and launches another magic missile, while the Fighter pierces the second guard with his magical javelin. When the Cleric subsequently releases her spell, a hissing, hurtling ribbon of pure darkness flies from her hand and strikes the salamander hard. Nothing remains – not even of the special javelin. This display of power chases away the new guards, who retreat into the delivery place, and gives them a moment of time to drink their fire-resisting potions. Not all do so though…

Lilith orders the Wizard to send an elemental into the next room to trigger an attack by the Flamebrothers. The sisters walk forward, accompanied by Alvra, and follow the summoned creature. While the salamanders are focused on the elemental, Alvra peeks into the room and sees that someone, or something, is watching the fight farther down. Phaedra shoots one of the Flamebrothers with her crossbow and scores a full hit. A spell of blindness hampers the salamander further, and together the Cleric and Fighter manage to kill it. 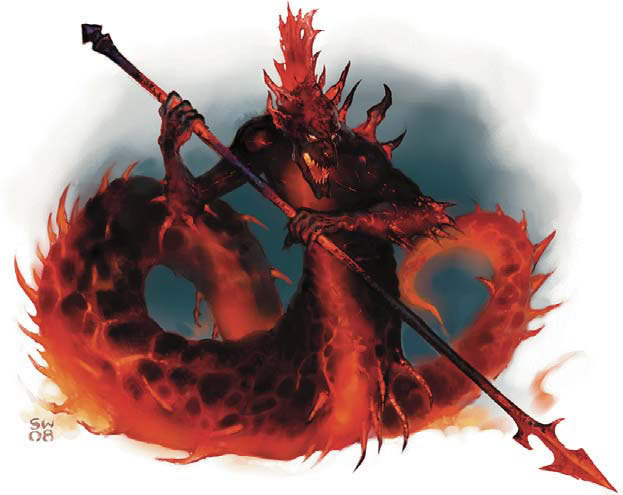 Another one attacks Lilith, but the potion she took protects her against the fire damage – damn useful, these potions – and while it’s thus busy, one of the Wizard’s magic missile ends its life. The last Flamebrother is under heavy attack by the Scout, who strikes hard with her spike chain. The flame quickly runs out of the beast.

The earlier spectator turns out to be a Fire salamander, that joins in the fight. The beast is as tall as the Drow and has a large tail. It doesn’t much like the ray of frost the Wizard sends. When it tries to grapple Alvra, the little mouths on the Drow’s breastplate gingerly bite into the Fire salamander’s tail. Alvra manages to free himself, but suffers another spear attack by the beast, while the tail lashes out at the Cleric. The elemental’s time in the Underdark has run out, so Jharrath summons three new ones. In a vigorous attack these beings kill the Fire salamander.

In the next room they see the torn up body of a Duergar on the ground – the dwarf has been tortured and scorched. They have found what’s left of the group that went to pick up the magic staff for Thangarth. A rack contains weapons in good condition, and in the Duergar’s clothes Phaedra finds a heavy pouch with two hundred gold pieces.