It’s good to see commandant Djuhah again, that makes things so much smoother. Two guards stay behind to take care of the prisoner and the bodies, while the other guards join the party. Together they set out towards the Trades District, travelling in an open coach. Since it is getting rather crowded in the coach, Darryl hangs on to the side.

The Trades District sounds more chic than it is: a collection of shabby buildings and sand roads, which are mostly deserted. The coach pulls up near #352. The brothers get out to scout ahead, leaving the Paladin and Cleric behind: sneaking is not one of their virtues. After a short while, the halflings find themselves staring up at a warehouse two stories high with a slightly pointed roof. Narrow corridors flank the house. There are windows on either side at the first floor.

With his keen eye sight, Larryl spots someone kneeling on the left side of the roof, while his brother thinks all is clear on the right side. Via an evading route Larryl nears the building and climbs up towards the first floor: the window shutters are open.

Finding enough hand holds, he climbs to the top of the warehouse and crawls towards the guy on the roof. He has to prevent the sentinel from alerting the rest of the gang and sees no other option than to take him down. When Larryl is real close, he attacks and hurts the guy very badly. In a second attack he finishes him off. The roof cleared, he cleans his weapon and climbs down to return to Tonks and Magnys, who are waiting impatiently.

Meanwhile Darryl climbs up the right wall of the warehouse. The window is secured by bars. Peeping through, he sees a kind of balcony with a wooden balustrade. He jumps down and meets with the rest. Quickly the brothers explain the situation to the others. They will have to get in through one of the windows and open the front door from the inside. Larryl and Darryl then go back to assess the situation on the windows.

After a thorough inspection, Larryl notices that a bar in front of the first window on the left side has come loose. Very quietly he gets it out of the way and – followed on his heels by his brother – he enters the building.

They step onto the wooden balcony Darryl has seen on his first climb. The landing winds itself all around on first floor level. Larryl walks boldly towards the guard, who whispers

It’s Larry, Darryl is right behind me.

The suspicious guard is still aiming his bow at our friends. They try talking their way in. Meanwhile another guard comes up the stairs.

Doesn’t Mutamin tell you anything? We are new recruits, we were scouting the Inn. I’m unarmed, lower your bow!

Larryl shows him the heavy money pouch and the gold tinkles softly. Both guards relax a bit and they exchange some smalltalk. Suddenly the door at the bottom of the stairs opens and a man walks in, fully armored.

What is happening here?!

Seems play time is over. Darryl jumps into action and charges with a flying kick against the second guard. When the guard defends himself, Darryl attacks with a flurry and kills him.

Larryl stabs the first guard with his kukri and then shoves him off the balcony. The guard tries to escape down the stairs but the ninja reacts quick as lightning and drops him like a fly. He jumps down and tumbles towards the front door. They need help!

The armored dude grabs his bow and shoots at Larryl. It’s a hit. After this, he disappears through the door into the interior of the warehouse again.

Inspecting the door, the Ninja discovers traps, so upstairs Darryl jumps out of the window to report back to the others. Tonks casts a Dark Bridge towards the window and, together with the Paladin and the Monk, climbs in, while the City Guards guard the building from the outside. 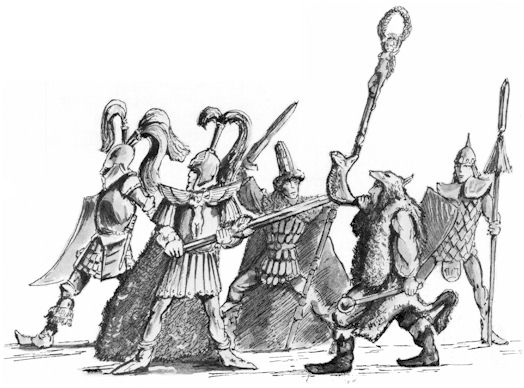