The last smoldering parts of the Waterspirit are being doused by the crew, while Tonks and Magnys heal the wounded. Everyone helps to repair the damaged ship and soon she’s sailing again to Skuld. In the middle of the night the paladin awakens as a sailor softly asks her to accompany him to the deck. Captain Nalas is waiting for her, pointing at a spot in the distance where the moonlight on the waves is disturbed by huge black forms. To Magnys’ utter delight, there are whales swimming out there! She rushes down the stairs to drag a sleepy Tonks with her to watch the spectacle. The halflings are vast asleep; Darryl dreams about eating whales 😉 In daytime Larryl practices his skills by sparring with his brother, while the reparations of the ship continue.

After a few uneventful days, the look-out announces the long awaited sight: land to the East! The halflings nimbly climb up to the crow’s nest to see for themselves. They sail past dunes for hours, far into the night, and in the morning finally maneuver into a bay. In the distance a huge city can be seen: Skuld. Larryl and Darryl climb back down and together they watch the other shipping. Skuld is a lively port, protected by a large city wall, and trades with all parts of the world. Consequently culture and religion are influenced by outsiders. Skuld uses irrigation for growing crops. It is ruled by clerics (Horus-Re and Anhur) and the military upholds the law. Gnomes are not general, population mainly consists of humans.

The Waterspirit sails past a lighthouse, a military port and then docks at the harbor – not the best part of town. Captain Nalas recommends trader Waleed to conduct business with and the Golden Bracer Inn as (luxurious) accommodations. He himself will be staying at the Foaming Pint – near the warehouses and port – and will wait one week for our travelers, in case they want to go back home. Larryl asks for a letter of recommendation for the trader. Waleed can be found in the warehouse district plus in his stall at the bazaar.

The companions head into town where Darryl asks a guard for directions to the Golden Bracer. The guard explains that they’ll have to find a city coach. No sooner said than done. Darryl gets on a coach in search of the inn, but the others first want to visit the bazaar. Their driver’s name is Ahmad. On the bazaar Tonks and Magnys buy figs and olives and then continue towards Waleed’s stand. Larryl hands over his letter of recommendation and Waleed is most interested. Magnys and Larryl offer their goods and Tonks asks for a gold smith.

Darryl arrives at the Golden Bracer and rents two double rooms with a private bathroom at the price of 10 gold pieces, including a normal massage for himself and a sensual one for his brother. Boy oh boy, will he enjoy that! The rooms are very luxurious with two beds, a bathtub behind a curtain and a wardrobe. The bath is filled with lukewarm water and scented oil. The halfling kindly asks the servant to have his clothes washed. 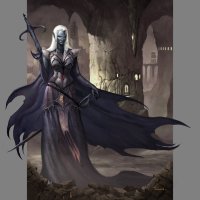